Harmonist: Dayoriah Clan Infiltration (Harmonist) is a stealth coffee-break roguelike game. The game has a heavy focus on tactical positioning, light and noise mechanisms, making use of various terrain types and cones of view for monsters. Aiming for a replayable streamlined experience, the game avoids complex inventory management and character building, relying on items and player adaptability for character progression.

Your friend Shaedra got captured by nasty people from the Dayoriah Clan while she was trying to retrieve a powerful magara artifact that was stolen from the great magara-specialist Marevor Helith.

As a gawalt monkey, you don't understand much why people complicate so much their lives caring about artifacts and the like, but one thing is clear: you have to rescue your friend, somewhere to be found in this Underground area controlled by the Dayoriah Clan. If what you heard the guards say is true, Shaedra's imprisoned on the eighth floor.

You are small and have good night vision, so you hope the infiltration will go smoothly... 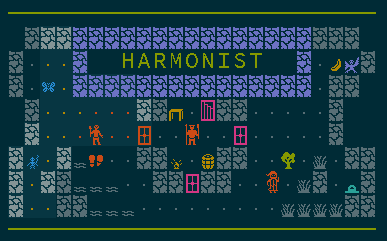 While the game is heavily influenced by Boohu, because the game started as a fork of Boohu's code, it's a very different game. The main webpage gives some more details about other possible influences.